My name is Jacob Florence, and this is my blog for exploration and reflection on Dr. Staub's Renaissance literature class. While I've blogged before, mostly about day to day life and my struggling attempts at the life of a professional cyclist, this is the first time I've used a blog to delve deeper into my academic pursuits. Hopefully I can make myself, and maybe my readers, think a little more or a little bit differently about Renaissance literature, or at the very least have a place to record my own reflections and thoughts, especially since they don't always get discussed in class. 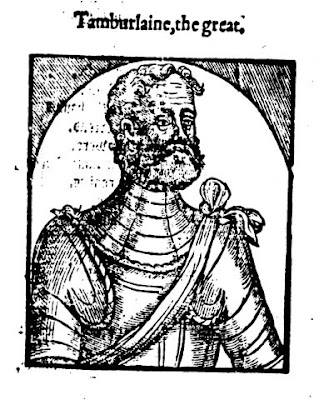 Perhaps one of the more interesting ways in which Early Modern authors dealt with Tamburlaine (and thus the Islamic threat he represents) is a distinct Anglicization. The above image is a woodcut found between parts in a collection of both halves of Marlowe's play. The facial features are prominently European: a high forehead; a thin, long nose; waving hair and a bushy beard that, if this were in color, would certainly be a shade of blonde or light brown. And the armor is not that of an Eastern warlord, but also English: polished sheets of metal without adornment, no festoons or pompy bells on the shoulders, as one might expect in the depiction of an Ottoman Emperor, but rather a high metal collar around the neck that reminds one of the ruffled shirt-necks popular of the period. 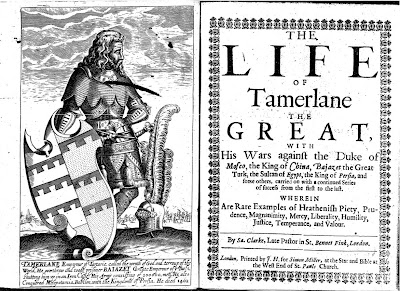 Here we have something even more odd in its depiction of Tamburlaine. The details of the artwork at the front of this history meld English and Ottoman well. Tamburlaine's features are again distinctly European, if only less groomed, with longer hair and a more pronounced beard. The armor is more betraying, though. The shield and the helmet appear typically European, as does the general shape of the armor. Around his shoulders Tamburlaine wears a mail chain, but as one looks lower down, the details of the armor become more elaborate, more ornate, more foreign. By the time one's eyes reach the bushy frill on the bottom of his skirt, Tamburlaine begins to look more and more the Ottoman warlord, with puffy bells hanging down and elongated lines decorating his legs. This convolusion of styles mirrors a textual depiction of Tamburlaine that, in content is accurate, but in context constructs not an overreaching Ottoman leader, but a noble Christian knight defending England from an outside threat.

In this history, the logic where "the enemy of my enemy is my friend prevails." Tamburlaine is portrayed as having "piety, prudence, magnanimity, mercy, liberality, humility, justice, temperance, and valour," despite his "heathenish" nature. These adjectives certainly do not describe Marlowe's Tamburlaine, nor do they describe the Early Modern view of Timur and the Ottoman Empire. Yet Tamburlaine isn't constructed here as a Turkish ruler, but as the enemy of Turk, of Ottoman, warring against China, Egypt, and Persia. Far different from the construction of Tamburlaine as Antichrist, the author here constructs Tamburlaine equally complex into the role of European savior against Eastern threats.

This portrayal serves to strengthen the idea of Tamburlaine as Antichrist even more, though: at the outset of Marlowe's Tamburlaine, the title hero is opposed to the Turk Bajazeth, and so there is the appearance of Bajazeth as Islamic Antichrist and Tamburlaine as eloquent English savior. In fact, Tamburlaine is even able to seduce Zenocrate, the princess described over and over as "white." In conquering Bajazeth, though, Tamburlaine instead consumes his role. As the Antichrist, the king of lies, Tamburlaine is willing both to turn against his "countryman" and to effectively lie while playing the part of English savior, only to turn around and reveal himself as Turkish Antichrist once he has gained sufficient power.

Bibliography (in order of appearance)

Clarke, Samuel. The life of Tamerlane the Great. London: printed by J.H. for Simon Miller, at the Star and Bible at the west end of St. Pauls Church, 1664. Early English Books Online. Appalachian State University. http://gateway.proquest.com/openurl?ctx_ver=Z39.88-2003&res_id=xri:eebo&res_dat=xri:pqil:res_ver=0.2&rft_id=xri:eebo:citation:99895418
Posted by Jacob Florence at 3:35 PM